BRICS Academic Dialogue on Digital BRICS: A New Framework for Cooperation on Technology and Innovation 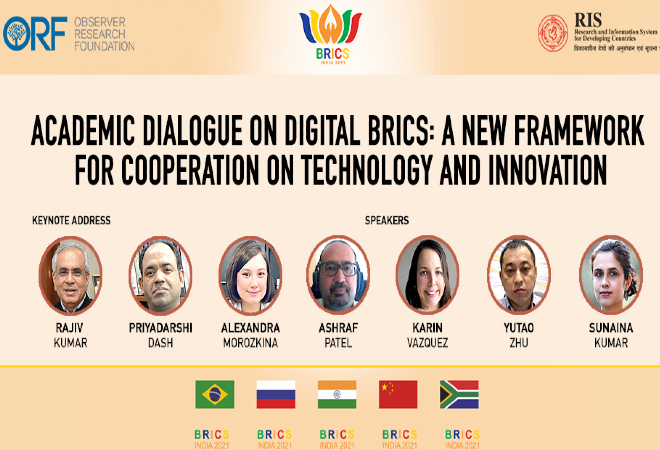 It’s undeniable that in today’s era, technology and innovation has become the backbone of the global economy. The impact is not limited to the economy but influences society as a whole by improving human lives. A need has been felt for devising a new framework for cooperation on technology and innovation. The need for this framework is also felt by the BRICS countries as it is essential for emerging markets to be pathfinders in the digital economy and challenge the domination of digital incumbents through innovation.

Dr Rajiv Kumar, Vice-Chairman of Niti Aayog, India, in his keynote address mentioned the importance of leveraging technology and digital solutions. He further mentioned the efforts of India to empower its citizens through technology and innovation. He highlighted the efforts made by Attal Innovation Mission and Start-up India Scheme in providing the youth with necessary market linkages to scale up their production. According to him, the next stage of growth in the technology sector will come from SMEs. He further added that India has been able to redefine SMEs by providing them greater space and potential to grow by enhancing their revenue and investment limits. He asserted that with a similar approach, enterprises of developing countries can grow immensely as they will benefit from technology advancements which in return will give them efficient credit and market access.

Professor Karin Costa Vazquez, Assistant Dean for Global Engagements, and Associate Professor & Executive Director, Centre for African Latin American and Caribbean Studies at O.P. Jindal Global University remarked on the deteriorating condition of information and communication technology in BRICS nations. According to her predictions, it could boost international trade by a quarter, but there are several incipient issues because of lack of legal provisions for technology transfer, cyber security, data protection, and lack of clarity on definitions of e-trade in goods and services which needs urgent attention. Further, she forwarded the demand for a regulatory framework to protect data which according to her is the most difficult task as technology dictates the flow of data and is connected with several systems.

Dr Alexandra Morozkina, Head of the Structural Reforms Division, Economic Expert Group, Russia, remarked on the issues of digital literacy and inequality. According to her, digital inequality still requires a lot of work and a robust statistical evaluation system is the primary step to minimise the gap on the domestic front. She asserted that national and international averages are misleading all the time. Hence, they should not be considered and cooperation is required in areas of digital infrastructure with respect to digital literacy. She emphasised the need to revisit the digital literacy evaluation criteria as different countries follow different methods bringing non-uniformity in the bloc. Hence, she proposed BRICS countries to step in and devise a new uniform framework. Lastly, she mentioned that digital literacy is also essential for officials as they need to understand the importance of digital tools which can be used in public services efficiently.

Dr Yutao Zhu, President of China Branch of BRICS Institute of Future Networks, China, commented on the experimentation with 5G technology which is being adopted by all countries around the globe for faster network. He noted the need for digital security which is very essential with the ongoing experimentation process. Moreover, he proposed that all countries should develop a standard system from best use cases.  He further mentioned the positive impact which digitisation will have on the economy and asserted that new ICT techniques like AI, cloud computing, etc. can be used in traditional fields like education in the future as well.

According to Mr Ashraf Patel, Member, South Africa BRICS Think Tank Network (SABTT), South Africa, we are in a situation of crisis and contradiction of overproduction amidst poverty. He added that most of the crisis in the digital economy is in continuation of the crisis in the Goods and Service economy.  He highlighted that data is not delinked from normal economy and inequalities we see in the labour market; all of this is reproduced in the information economy. He also pointed out that South Africa wants to retain elements of data sovereignty for national development as the current model doesn’t encourage local entrepreneurs and small and medium-sized enterprises (SMEs), instead promotes multi-national companies (MNCs). He added that SMEs led by youth have lowered the dependence on MNCs and IP. Therefore, cooperation on digital industrialisation needs to evolve with the proliferation of SMEs and start-ups in the field, with the aim to decrease dependence on MNCs.

Dr Priyadarshi Dash, Associate Professor, Research and Information System for Developing Countries (RIS), India, highlighted the importance of digital economy and the need to study the subject in today’s age. He even commented on the latest report of UNIDO which states that BRICS countries are not front runners in technology and innovation, except China which understands its value. He added that there is a lot to learn from the pandemic as a lot of challenges have been identified during the pandemic and it helped the society to switch to better options. He reiterated Mr Patel’s point on SMEs by mentioning about the BRICS Finance Minster’s meeting in February focussing on SMEs and financial inclusion. According to him, SMEs have always been on a back foot because of low working capital on which BRICS should work as a bloc.

Ms Sunaina Kumar, Senior Fellow, Observer Research Foundation concluded the session by highlighting the crisis situation due to the medical emergency which has increased the dependence of human race on technology. She added by saying that BRICS has been the centre of attention as it accounts for 42 percent of world population and holds the most valuable asset, which is data of 3.2 billion people. She even focused on the dichotomy of digitalisation which promises to not only create economic growth but also has its downside of security threats.