This paper was presented at the 10th Expert Meeting "BRICS - Presidency of India 2021", 7 July, Rome.

For a comparison on the new capitalisms. The cases of India and China. A proposal from Italy to the BRICS on the conversion of sovereign debts.

The meeting addresses the following topics: 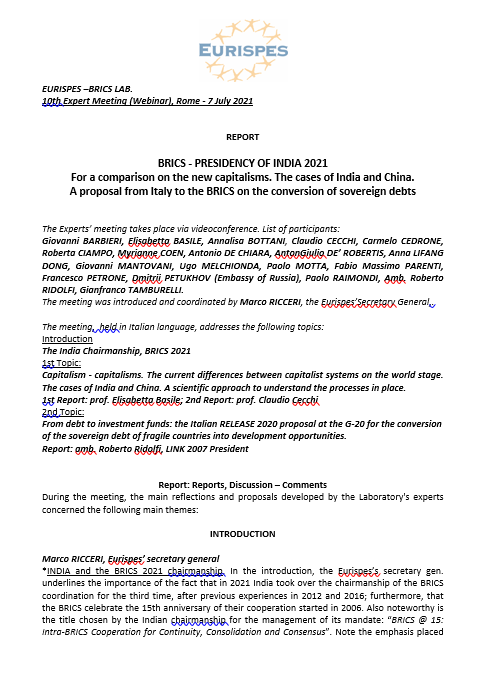 "The study of the BRICS coalition raises questions that lead us to reflect on the development processes of the countries involved and on the future prospects of the initiative. Two important questions:

1) Why has the BRICS coalition had a marginal impact on the economic processes of the member countries, with the evident consequence that the differences between them have increased rather than decreased?
2) Why are joint economic-political initiatives difficult to carry out and the actual results, apart from the creation of the Contingent Reserve Arrangement (CRA) and the New Development Bank (NDB) in 2017, are overall modest?

The answer to these questions is that the BRICS countries follow very diversified trajectories of change and development which are the product of the prevailing institutions in each country. The BRICS are very different economies that have very different institutional arrangements and cultural values; these differences explain the different development trajectories and conflicts of interest within the coalition, they also explain the trend towards an hegemonic role of China and its conflicts with India which can appear today also as an antagonist subject within the BRICS..."