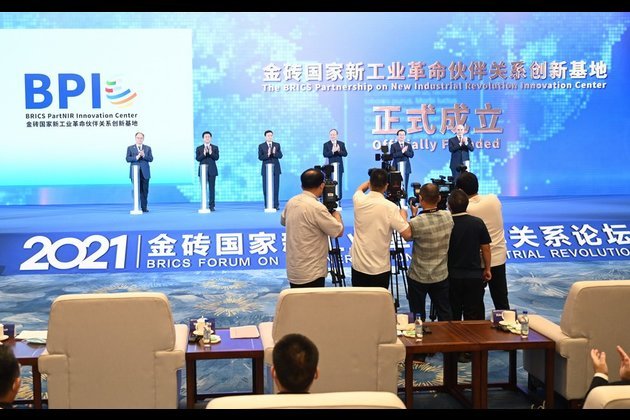 XIAMEN, Nov. 17 (Xinhua) - Enterprises from BRICS countries are strengthening ties and finding more cooperation opportunities despite COVID-19, partly thanks to an innovation center launched last December in the Chinese city of Xiamen.

Benefited from the BRICS Partnership on New Industrial Revolution Innovation Center, Xiamen Rockwise Information Service Co., Ltd., a stone trading platform, has attracted around 30,000 stone suppliers, including over 700 dedicated to stone imports from other BRICS countries.

Despite COVID-19, stones worth more than 60 million yuan (about 9.4 million U.S. dollars) were imported from Brazil, India, and South Africa to China in the first ten months of this year through the platform, said Lu Ni, one of the partners at the company.

Lu said the establishment of the innovation center, which focuses on policy coordination, talent cultivation, and project development, has enhanced their confidence to expand the stone business with other BRICS countries.

BRICS is the acronym for an emerging-market bloc that groups Brazil, Russia, India, China, and South Africa. It is home to over 40 percent of the world's population and about a quarter of the world economy.

The BRICS Partnership on New Industrial Revolution Innovation Center was launched in Xiamen in December last year. At the center's inauguration ceremony in September, 28 projects with a total investment of over 13.4 billion yuan were inked by BRICS enterprises.

It has provided a foothold for companies to use technological innovation and digital transformation brought by the new industrial revolution.

Huanchuang (Xiamen) Technology Co., Ltd. is a high-tech enterprise specializing in the disposal of solid waste and service operations. Its customers are in Russia, India, and South Africa.

Yuri Saprykin, vice president of the Skolkovo Foundation, said the Skolkovo innovation center attaches importance to and looks forward to deepening cooperation with Xiamen's innovation center. The center expects both sides to speed up collaboration and promote the development, operation, and market expansion of Russian and Chinese entrepreneurs in the two places.

Alessandro Golombiewski Teixeira, distinguished professor of public policy at Tsinghua University, said Xiamen's innovation center is an excellent example of building the industrial revolution partnership between BRICS countries, which was meaningful not only for BRICS but a positive experience for the world.