On 18 July 2022, the Russian House in Thiruvananthapuram organised a seminar on SIGNIFICANCE OF THE 14TH BRICS SUMMIT IN THE PRESENT GEOPOLITICAL SITUATION'. Diplomats, experts on international relations and economists participated in the seminar, which was organised in a hybrid format. 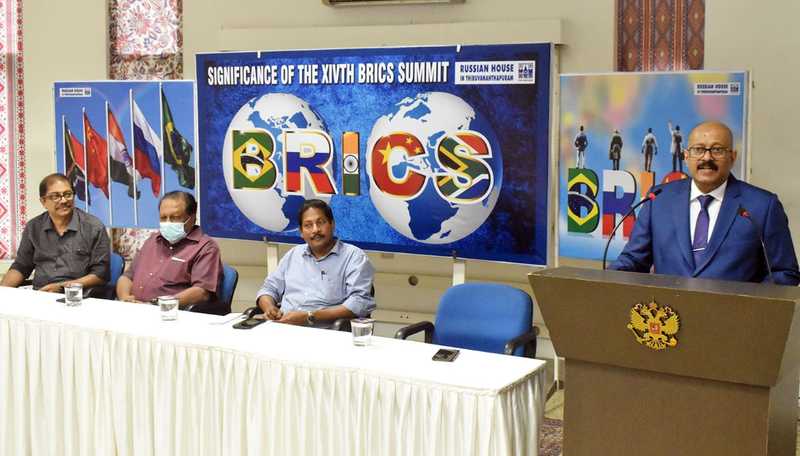 ​Former Indian Ambassador Mr T. P. Sreenivasan inaugurated the seminar. Experts in international relations and Head of the Department of Political Science, P G M Government College, Aluva Dr P. Anilkumar and expert on banking related affairs Mr Santhosh Kumar spoke on the seminar while Head of the Representative office of Rossotrudnichesvo in India and Director of the Russian House in New Delhi, Counsellor, Mr Oleg Osipov, Vice- Chairman of the Board of Russian National Committee on BRICS Research and former Russian diplomat Mr Georgy Toloraya and Expert on Trade and Commerce and Head of the Department of Commerce Achutha Menon Government College in Thrissur, Dr Madhusoodhana Kartha participated online. ​
​
Inaugurating the seminar, Mr T.P. Sreenivasan said that the dynamics among members of BRICS had changed, and the grouping will have to wait for a more congenial global situation to achieve greater cohesion and cooperation. But the initiative of the member nations to increase trade is a positive sign. He also said that the difference of opinions of the member nations on certain areas should not affect their interest in developing trade.​
​
Delivering the key-note address, Mr Oleg Osipov said that BRICS had been created not to counter other countries or international organisations but for the benefit of its member states. "BRICS is a relatively young association, but it arose during the breakup of the unipolar system in the world and therefore became attractive to many countries. In addition to Argentina, Iran, Turkey, Saudi Arabia, and Egypt, pieces of information are there about other countries like Tajikistan, Indonesia and some African countries that have shown interest in joining the group. The BRICS member states have huge political, economic, scientific, technological and human potential, said Mr Osipov. 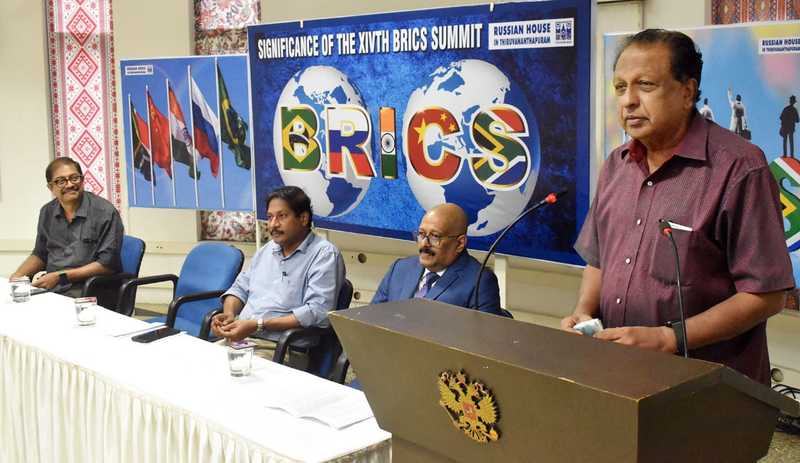 ​In his address, Mr Georgy Toloraya said that the new format of cooperation like BRICS has a major role in the current geopolitical situation. "The 14th summit of BRICS has proved that the world's biggest and most populous countries representing different civilisations could form a common ground in many areas. BRICS has once again proved that this is a useful format based on the principles of equality, " said Mr Georgy Toloraya. ​ ​
Presiding over the function, the Honorary Consul of the Russian Federation and Director of the Russian House in Trivandrum, Mr Ratheesh C. Nair, said that unlike the European Union or NATO, ​ BRICS did not set itself in opposition to anyone. It is a truly democratic and multipolar world order based on international law. Quoting the director of the information and Press of the Russian Foreign Ministry, Ms Maria Zakharova, Mr Nair said that the world was not limited to the collective West and The world deserves much more than we get today.
Dr Anil Kumar, Dr Madhusoodhana Kartha and Mr Santhosh Kumar expressed hope of increasing trade among the BRICS member nations by promoting trade in their own currencies.​