The VI BRICS International School will be held by the Russian National Committee on BRICS Research on November 20-25, 2022 in Moscow, Russian Federation. 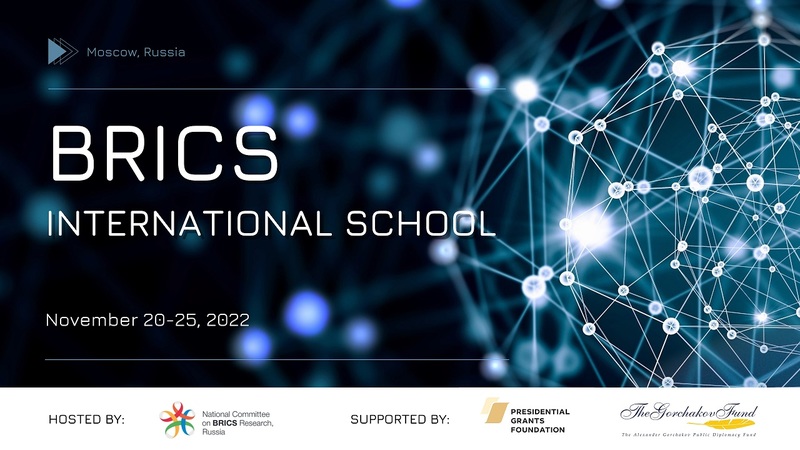 The BRICS International School is a unique scientific and educational program aimed at training young experts specializing in BRICS studies in political, economic, humanitarian fields and other relevant areas of interaction within the five countries – Brazil, Russia, India, China, and South Africa.

Participants of the BRICS International School are young diplomats, scientists and researchers, journalists, entrepreneurs, students as well as post-graduates from Russia, Brazil, India, China, South Africa, aged from 18 to 35, are invited to join this program.

Participants are offered a specially developed comprehensive course. The course is divided into thematic modules, organized together with partner organizations – leading think-tanks in Russia, whose headquarters are located in Moscow.

Mentors of the BRICS International School are top Russian and international experts and practitioners, representatives of governmental and non-governmental organizations, ministries and agencies, think tanks with considerable experience in BRICS research. The BRICS International School allows participants to broaden their professional horizons, develop communication skills, and study specifics of cooperation among the BRICS countries – their positions on the global arena, prospects of institutionalization of the BRICS format, goals, and priorities of the grouping for the future.

The program is held on an annual basis with the support of the Ministry of Foreign Affairs of the Russian Federation.

In 2022 the program is held with the grant support of the Presidential Grant Foundation and the Alexander Gorchakov Public Diplomacy Fund.

The purpose of the BRICS International School is to expand a pool of young experts-BRICSologists for further development of a youth cooperation within BRICS as well as to support future-oriented projects and ideas of young leaders from BRICS countries.

The main objectives are:

Participation in the program is free of charge.

This program is for:

To aplly you have to:

The list of participants will be published on October 10, 2022. Successful candidates will be notified by e-mail and invited to take part in the BRICS International School.

Upon completion, participants who have mastered at least 75% of the educational program and have successfully passed the final testing will receive certificates.

This program is aimed and building inter-civilizational dialogue. We urge you to treat one another with dignity, respect and civility and acknowledge cultural differences.

This year, the BRICS International School is carried out in conjunction with the Essays Competition "BRICS and the World Community: a Success Story of International Cooperation" to identify the most promising ideas to enhance practical cooperation among youth from BRICS countries and beyond.

The purpose of the competition is to develop critical thinking and essay writing skills on relevant topics of international cooperation, as well as assistance in testing scientific research of young specialists. The competition is an additional part of the BRICS International School, not mandatory for all participants.

The main objectives are:

The essay is written in English (2500-3000 words) on one of the proposed topics and should represent the future-oriented project or original research of the one author. The results of the competition will be announced at the end of the BRICS International School.

The authors of the best essays will be invited to publish their essays in the BRICS Journal of Economics (Moscow) and the BRICS Law Journal (Tyumen) for free.