Don’t let your award winning thesis go in vain when you have such a golden opportunity at Exim Bank's BRICS Economic Research Annual Award 2020. If you fulfil all the mentioned requirements, apply now the BRICS 2020 Award. 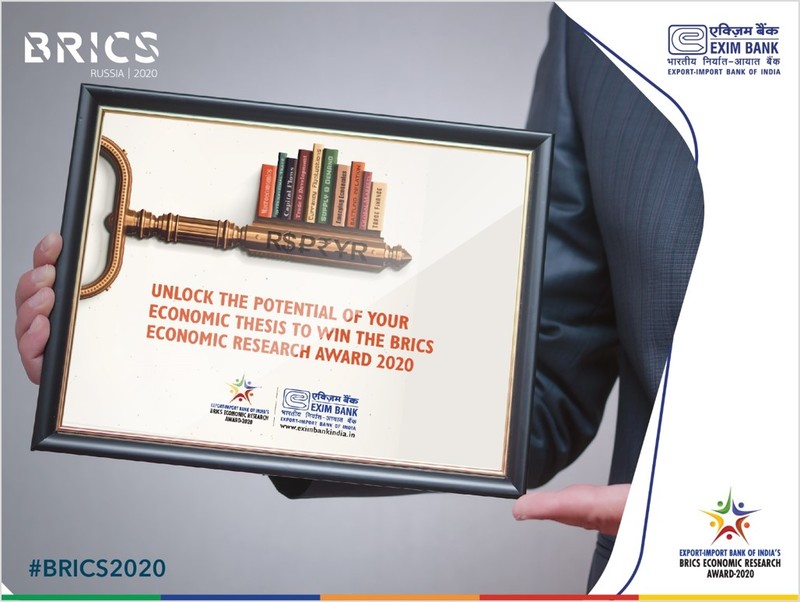 Background of the Award

The objective of the Award is to stimulate and encourage advanced doctoral research on Economics and related topics of contemporary relevance to the member nations of BRICS. The Award comprises prize money of Indian Rupees 1.5 million (approximately USD 22,000) sponsored by Exim Bank, a medal and a citation. Doctoral thesis of nationals of any of the five member nations of BRICS, i.e. Brazil, Russia, India, China and South Africa, who have been awarded a Doctorate or accepted for the Award of a Doctorate from any recognized nationally accredited University or academic institution globally, are eligible to participate and receive the Award.

The Award accepts as entries, doctoral thesis written by nationals of any of the five member nations of BRICS, who have been awarded a doctorate or accepted for award of a doctorate from any nationally accredited University or academic institution globally, during the period January 2015 to March 2020. The broad focus of the eligible theses could be International Economics, Trade, Development, and related aspects of Financing, which may also have particular relevance especially to BRICS nations/ member development banks of BRICS. The last date for receiving entries is March 31, 2020.