Implementation of the Strategy for BRICS Economic Partnership

Russian Chairmanship in BRICS 2020 presented an overview of Implementation of the Strategy for BRICS Economic Partnership in the period 2015-2020.

The toolkit was prepared by the BRICS Russia Expert Council with the support of the Ministry of Economic Development of the Russian Federation and the Russian National Committee on BRICS Research. 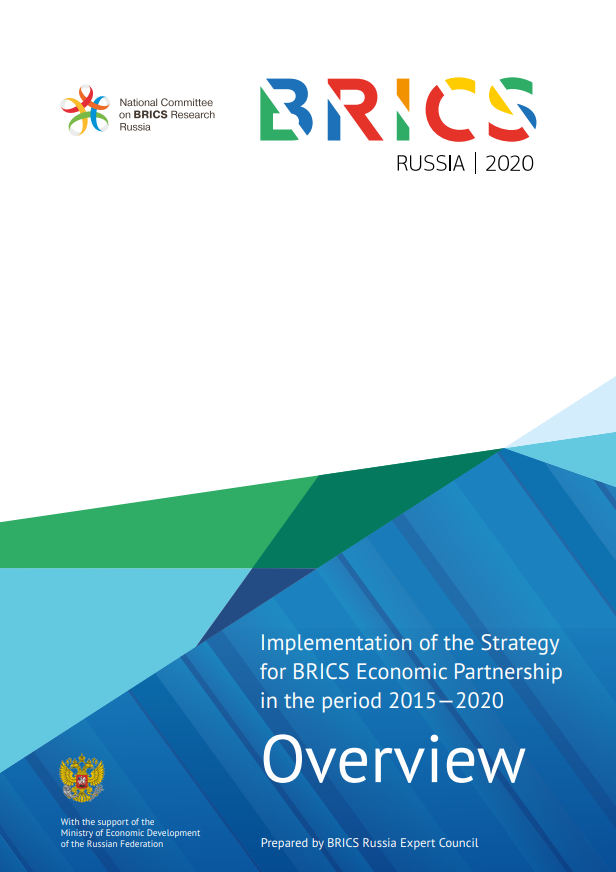 The BRICS Russia Expert Council has assessed the achievements of the Strategy for BRICS Economic Partnership between 2015 and 2019 and prepared a comprehensive analytical report.

The overview  indicates a significant amount of implemented activities and adopted documents on all areas of BRICS cooperation. Institutional infrastructure for cooperation both at the ministerial and expert levels has been established, while programmes and action plans have been adopted in key areas of cooperation.

The analysis of the implementation of the Strategy for BRICS Economic Partnership until 2020 showed that the BRICS countries have achieved substantial progress in most areas of economic development and cooperation. They have strengthened their positions in the global economy and trade as the recipients and donors of foreign direct investment (FDI) and have enhanced their role in the global financial architecture. They dynamically boosted mutual trade, institutions and mechanisms of financial cooperation, expanded their interaction and reachedpractical results in a number of economic regulation areas. By 2020, the total GDP of the BRICS countries  reached 25 percent of the global figure ($21 trillion), their share in international trade amounted to nearly 20 percent ($6.7 trillion) and mutual trade increased by 45 percent (between 2015 and 2019).

“The world has changed and continues to change rapidly before our eyes because of the coronavirus pandemic. The cooperation of the BRICS countries, including economic one, is increasingly facing  new challenges and risks that were far from apparent five years ago. They include the growing transformational processes of the global economy and trade under the influence of digitalization and radical technological innovations of the 4th Industrial revolution , a crisis of the international trading system, growing threats to sustainable development and the formation of a strong demand for inclusive development”.

“The BRICS countries should offer and implement adequate responses to emerging new challenges and threats, which is another reason for a fundamental renewal of the Strategy for BRICS Economic Partnership”.